Lisztomania in the year 2011 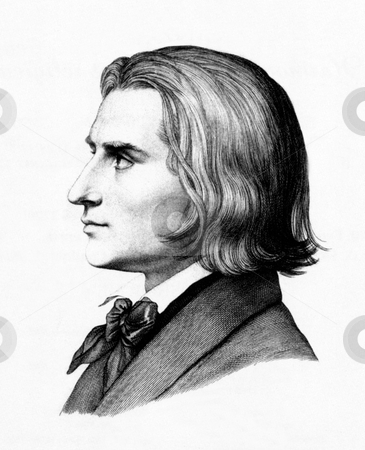 Side portrait of composer Franz Liszt dated 1843 by unknown author.

If one were to bring a group of music lovers together and asked them who their favourite pianists of the Romantic period were, Beethoven, Mozart, Brahms and Chopin would undoubtedly be mentioned.

Now ask me, and my answer would be a trifle long winded – – though I savour the music of those maestros, I die-hard for Alexander Scriabin (late Romantic/20thC), hooked after playing his Prelude and Nocturne, Op. 9 for the left hand only.

Take a look at the picture to the left. I’ve heard many would swoon for this man.

He is depicted as a child prodigy from the various accounts Iâ€™ve read. The tomes describe him as a great improvisor, a talented composer, a true showman and a personality to be reckoned with.

According to Wiki, his â€œmesmeric personality and stage presenceâ€ created massive hysteria at his concerts to cause â€women (to fight) over his silk handkerchiefs and velvet gloves, which they ripped to shreds as souvenirs … his playing raised the mood of audiences to a level of mystical ecstasy.â€

Wishful thinking but, I’ve got to meet this guy!

Then the invitation arrives; to spend an idyllic afternoon at the Nashville Steinway Piano Gallery in celebration of his 200th birthday. How could I refuse!

I arrive at the Piano Gallery fashionably “just in time” to honour the birthday boy -Â Franz Liszt is his name.

This party is to be a double celebration with the Piano Gallery commemorating its 20th anniversary. Marilyn Shields-Wiltsie; Steinway artist and founding member and President of the Steinway Society of Nashville, is on hand to get the party started. Marilyn is honoured with a plaque for 20 years of service to Steinway Nashville before she sits down at a glossy Steinway, dressed in a bejeweled powder-blue gown, to give an all-Liszt program to an audience there by invitation.

But first, a biographical overview by Dr Ted Wiltsie (husband to Marilyn) who recounts the tale of Lisztâ€™s extraordinary life, his affairs, his enamoured fans who never failed to provide him with a reception fit for a modern day pop star, and, his irresistible charm … did I hear nervous giggle from the ladies in the audience? I blush in sympathy.

Liszt is my kind of guy; an early Romantic, or should I (dare to) say, Romanticism aspired to be like him. Liszt had a perfect ear and was a great sight-reader. He created his own rules of composition, experimented with chordal combinations that suggested the atonality we have come to identify with 20thC music.

Ted’s tale underscores Liszt’s achievements, and as his voice reverberates around the room, I crossfade to Liszt stepping on stage to take a bow before launching into a passionate rendition of his Hungarian Rhapsody #2 (this piece for solo piano with a version for orchestra, made an appearance in a bugs bunny cartoon.)

Liszt invented the symphonic poem. The best-known of these are, according to Naxos’ catalogue “Ce quâ€™on entend sur la montagne, based on Victor Hugo, Les PrÃ©ludes, based on Lamartine, works based on Byronâ€™s Tasso and Mazeppa, and Prometheus, with the so-called Faust Symphony in Three Character-Sketches after Goethe and the Symphony on Danteâ€™s Divina commedia.”

In terms of piano technique as a performer and teacher, Liszt “was the first to suggest that each finger movement was connected to the arm and that changes in rhythm and expression were inextricably linked to the musician’s inner rhythm.” (quoted from La ScÃ¨ne musicale)

Liszt earned his living as a touring artist, such as the modern day rock star. He knew that to heighten the drama and magnificence of his playing, the audience had to witness his every grimace, every bead of sweat on his brow. Only then would he cast a spell on them. So it came to be that List popularised the modern side-way positioning of the piano during a recital, highlighting the profile (and accentuating his handsome features) instead of the performer’s back which was the standard configuration then.

It was at one such concert in Kiev, that he encountered Princess Carolyne zu Sayn-Wittgenstein. She became his beau and proceeded to suggest he stop all touring and to write instead. Perhaps she was acting in character of the “modern day girlfriend of the rock star”, not liking the kerchief-tearing mademoiselles he attracted?

Renowned American pianist, conductor and teacher, Leon Fleisher was Marilyn Shields-Wiltsie’s teacher when she attended the Peabody Conservatory in Baltimore. Like Scriabin, Fleisher lost the use of one of his hands at one stage in his career, his right hand.

Marilyn who is originally from Mississippi, holds a Bachelor and a Masters degree from the Peabody College, a school of the Vanderbilt University in Nashville. I did not have the opportunity to hear her play when we met in 2009 for an informal chat.

It is time for Marilyn’s concert, and all eyes are fixed on her in anticipation of the glorious music to ensue. She had after all performed at the home of Richard Wagner in Germany as part of the year 2000 Bayreuth Festival, playing his American 1876 Steinway presented by Steinway New York, on the occasion of the premier of his Der Ring des Nibelungen. The Ring of the Nibelung is a cycle of four epic operas and Marilyn performed on the off night of the cycle of operas.

Incidentally, Wagner became Liszt’s son-in-law when he married Liszt’s daughter, Cosima, who was director of the Bayreuth Festival for 31 years. Conceived by Wagner, the festival was created to promote his work.

We sit down for Lisztâ€™s FunÃ©railles, Liebestraum in Ab, Liebestod (Wagner-Liszt) and Concert #1 in Eb, with Marilyn resplendent in her satin gown on the left side of the stage, and Steve Alan Hyman on the right, ready to assist her in Liebestod with the orchestral reduction. Heads nod and sway in appreciation of the concert. I am contented to just sit there, listening to strains of Liszt lulling me into a dream-like state of another time and place.

Video (c) 2009/11 Shueh-li Ong (unless specified, all articles written by Shueh-li Ong bear the photography, videography and digital work of its author.